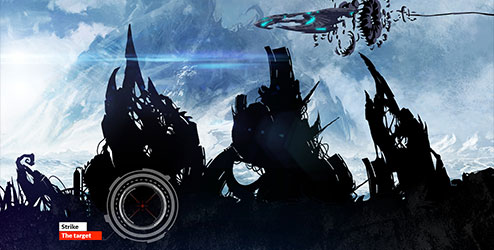 This is the third codingame challenge where the enterprise is in danger of dawning towards the surface of an unknown planet, it is at risk of crashing against towering mountains.

We are tasked of Helping Kirk and Spock to destroy the mountains and save the enterprise!

Passing the mountain in the middle

Easiest way to pass this is to hard code the solution, since there is only one mountain to destroy at xs = 3.

Passing the mountain on the right side

Well we can’t obviously use our hard coded solution anymore, so we will use this simple strategy:
As soon as we detect that the ship is above a mountain with any height, we shoot at it.
So basically it’s just “Shoot on sight”.

Passing the high mountain in the middle

In the third test we have a mountain in the middle that will need to be shot three times.

Our previous implementation passes this test, so nothing to be done there since shooting on sight as soon as we fly over the mountain is good enough.

Passing all the short mountains

This test we have short mountains everywhere. I didn’t expect the current implementation to pass this test since it’s still a bit naive, but it does !

Again we shoot as soon as we fly over a mountain. With the gun ship reload time we can see that we miss a few times.

Aha! This time we fail, the reason is that since we focus the first mountain first, we don’t see the big one coming in the middle and we quickly crashes into it. We should focus first on the highest coming one and forget about the lower ones since we still have plenty of time later on to destroy them.

So the solution is quite simple, instead of shooting at sight we now prepare ourselves to shoot at the highest one !

During this challenge I actually go tricked by Haskell laziness !

I Wasted an hour trying to figure out why this piece of code was causing mayhem:

When I ran my solution for the first test (where I used the hard coded strategy), it failed badly.
The console was sending me crazy positions about the mountains and the ship position.

I started to write a message on the codingame forum to complain that this lab was bugged…then I thought…maybe I could try my solution in C#, and the test passed !

So there were a difference in the execution for Haskell and C# when communicating with the console, and the only one I could thought of was: laziness. Haskell is lazy and won’t evaluate an expression until it is really used somewhere.

To better understand laziness, look at this C# code:

This code will never be executed ! Because Haskell is lazy, if we never use the mountains list later on, Haskell won’t bother evaluating this expression since we never used it (which is pretty smart and efficient).

And this was the case in my hard coded solution, I never used the mountains list (which is fine since I just want to hard code the solution and so I don’t want to deal yet with the list of mountains).

The solution to this problem was to force the evaluation of the mountains expression, for example by outputting the list in the debug console temporary for just passing this test with my hard coded solution.

We are actually starting to reach the point where we need a little bit of thinking for the challenges.
I don’t know yet what to think about Haskell laziness, most of the time you don’t feel it but when things goes wrong it can get pretty hard to figure out why things don’t behave as expected.

In this second codingame puzzle, Thor has lost its hammer and we need to help him find its way back to Mjöllnir !

Two things need to be done on each steps:

Haskell’s guards make the code really easy to read. I really enjoy the “rectangular” shape of the code which reminds me of truth tables thus it’s easy to quickly see if we handle all cases.

This second puzzle was actually easier for me than the first one. Maybe because in the first one I also had to understand how the whole environment was working, specially how you interact with the tests by using the standard input and output.

A useful powershell command to figure which app is using most memory. That’s convenient for applications like Chrome that tends to open multiple processes.

This is the first puzzle from codingame.com, in this puzzle we have to defend a planet with a big laser cannon from the invading insectoid alien ships !

To solve this puzzle we need to find which ennemy is the closest to us and shoot him, the way I’ve solved that is by using the sortBy function to sort ennemies by distance and blast off the closest one 😀

When you sort values you need to be able to compare them and I really like one implement type comparison in Haskell.

In most languages you will have to implement some interface like

where the return value acts as following:

I’ve never really liked the fact that you have to deal with that by using this kind of hack and it always takes me a few seconds to remember what it will mean if I return a negative number or a positive number.

Compare this to the Haskell implementation:

in Haskell you get to return meaningful values like: LT,GT and EQ.

I really enjoyed  solving this first puzzle, I’ve played around with the IDE and the user experience is really nice.

This is going to be a really fun way to keep learning more about Haskell since I finished my Edx course.